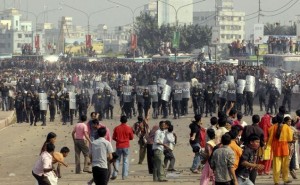 The human rights organiation has called on the Bangladesh authorities to order an immediate inquiry into the deaths during violent clashes between police and garment workers.

Garment workers in the country have been involved in strikes and street protests for the past six months demanding a higher minimum wage and decent working conditions.

Garment workers in Bangladesh are being supported unions and union organisations throughout the world including the TUC, AFL-CIO, Unite and the global union Workers Uniting.

Amnesty said in a statement that an inquiry must establish the causes of the deaths and find out if they were due to police brutality against the demonstrators.

The workers had been demonstrating for implementation of their wage increase, which the government had promised would come into force from the beginning of November. In clashes between the demonstrators and the police in Chittagong, Dhaka and Narayanganj, on December 12th, four workers died and more than 200 people were injured.

Dozens of people were injured in June and August as police clashed with hundreds of demonstrating textile workers calling for higher wages.

The government agreed to introduce a pay increase, which would come into force from the beginning of November.

Garment factory workers told journalists that their wages were not increased accordingly.

Amnesty said: “To address the workers’ grievance, the government of Bangladesh has decided to form a committee comprised of representatives from the government, workers and factory owners to implement the new pay scale.”

But, it said, “There has, however, been no news on how the government will investigate the use of force by the police to ensure that they have not committed human rights violations.”

Most of those injured have been garment factory workers taking part in the unrest. Police admitted that their officers had fired tear gas and live ammunition during the clashes. Newspapers reported that at least two of the four people who died have had marks of gunshots on their bodies. The identity of the other was not established.

Journalists say 10 garment factory workers, some of whom may have gunshot wounds, were admitted to the intensive care units of hospitals in Chittagong and Dhaka.

“We have documented a pattern of excessive use of force by police and other security forces in Bangladesh. Establishing the facts in the current incident through an independent and credible inquiry will show that the government is committed to ensuring that security forces do not violate human rights. Any one found to have used excessive force should be brought to justice.

Police announced that they had filed cases against a total of 33,000 people on charges of involvement in the violence. So far, more than 40 people are reported to have been arrested by the police. Some have been released but an unknown number remain detained, the organisation claimed.

“Amnesty International is urging the authorities to release the detainees unless they can be charged with a recognizable criminal offence. At all times, the detainees should have access to a lawyer of their own choice and receive any medical treatment that they may need.”

Among the detainees is Moshrefa Mishu, president of the Garment Sramik Oikkya Parishad (Garment Workers Unity Council), which promotes the interest of garment workers. Police arrested her on Dec 14 in connection with a complaint filed against her last June during an earlier wave of garment factories unrest. She was accused at that time that she had “ransacked” the office of a garment making business.

Given a pattern of use of torture in Bangladesh during interrogation, the government should ensure that the detainees are not tortured, and can have family visits, the statement adds.

In July a delegation from Workers Uniting visited Bangladesh and paid for  a full page ad supporting the 3.5 million mostly young women garment workers in their demand for a 35-cent-an-hour minimum wage. The advert was published on July 21 in The Daily Ittefaq.

Mr. Abul Hossain, president of the Textile Garment Workers Federation, immediately printed 20,000 copies of the ad, which were being distributed at rallies and worksites across Dhaka and Chittagong.

The day after the ad appeared, Prime Minister Sheikh Hasina told the media: “The wage the workers are paid, I will say, is not only insufficient, but also inhumane. The workers cannot even stay in Dhaka with the peanuts they get in wages.”

The Workers Uniting delegation met with the Bangladeshi Minister of Labour, the Minister directly accused the giant multinational retailers – like Wal-Mart and Tesco – of constantly driving down production costs and wages, leaving the workers trapped in misery. The multinationals have to be controlled, he told us, as they have no interest or regard for the Bangladeshi people.