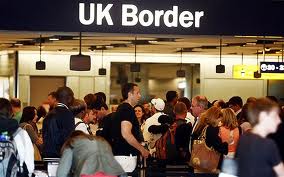 Since the Eastleigh by-election – where they finished behind UKIP – the Tories have been increasingly attempting to bolster support through anti-Europeanism, attacks on ‘scroungers’ and, most toxic of all, by taking an anti-immigration position.

The important fact from all these wild gyrations is that it is doing the Tories no good at all in the polls – the main effect of their lurch right is to benefit UKIP. Just like their wilderness years after 1997, every successive rightward shift and every new leader from the right, Hague, Duncan-Smith and Howard, saw their votes fall.

It was only with Cameron, who attempted to present himself as a politician of the centre, that their fortunes partially recovered.

The Tories have adopted a losing strategy by shifting rightwards. It therefore makes no sense for Labour to follow them, especially on the issue of immigration. Not only is it wrong in principle, there are no votes to be gained for Labour by adopting a milder anti-immigration rhetoric than the Tories. It will simply deter its own voters, or lose some of them to the LibDems.

Labour instead must challenge this anti-immigration framework head on.

An anti-immigration position is not only bad politics, it is also bad economics. Britain is attractive to those from other countries when the economy is growing. This aids growth, which was the case before the recession. The previous large phase of immigration came from the Commonwealth countries in the post-WWII boom, which was crucial in creating the NHS, which remains the most popular institution in Britain.

So it is vital that Labour responds correctly to this current debate and firmly puts the blame for the crisis where it really lies, with the Tories, whilst offering a clear alternative that includes the necessary role of immigration to Britain’s economic success.

There is no evidence that immigration is bad for economic development and growth. Actually the reverse is true. GDP per capita is consistently greater where there is a higher proportion of migrants as a proportion of the population. Immigration brings prosperity – something we should make a virtue of and not allow a right wing agenda to distort facts with no evidential basis.

Studies by Christian Dustmann, Tommaso Frattini, Caroline Halls, (8 August 2009), into the fiscal effects of A8 (countries in the 2004 EU enlargement including Hungary and Poland) migration to the UK finds that they are around 60% less likely to receive state benefits or tax credits, and to live in social housing.

They also found that A8 migrants made a positive contribution to public finances by paying 37% more in taxes than they received in public goods and services compared to British-born individuals who contributed 20% less. Not the image presented in Eastleigh of vast numbers of Bulgarians and Romanians coming over to scrounge benefits.

Jonathan Portes has also done some very good work in countering the assertions that immigrants drive down wages and are responsible for creating high unemployment. He shows that migrants represent around 13% of all workers, but only 7% of out-of-work claimants. Home Office research shows average migrant workers’ wages in Britain are around 5% higher than British workers, because on average they are more highly qualified. All of this is deliberately kept hidden.

Unfortunately the debate in Britain has not been about the real economic causes and consequences of immigration. All of the evidence shows that immigration is associated with economic success and that immigrants overwhelmingly contribute to growth and wealth. The immigration debate has not been about this but has been deliberately distorted in order to divert the real reasons for a failing economy away from the Tories, and to whip up hysteria over racism and Europe.

Growth causes immigration and immigration causes more growth. Labour’s response should be to welcome immigration and to put the blame where it really lies – with Tory policies. The lack of council house building is the reason for the housing shortage, not an influx of immigrants. The privatisation of the NHS is why waiting lists are increasing. Labour needs to vigorously expose these lies and offer an alternative to these failing Tory policies.

That means providing a vision to the electorate of a better future, including a future where migrants are welcome.