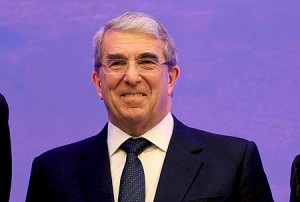 Smiling all the way to the bank....Sir Roger Carr

What do you get if you sell off a 200 year old iconic UK company to a US predator and then hike up gas prices by 7% into the bargain?

Yes, you got it – a knighthood!

Roger Carr, (described in some parts of the media as a “tycoon” – not heard that term for a while – or as a corporate raider), became Cadbury chairman in 2008. He alledgedly tried to fend off US giant Kraft’s attempts to buy Cadbury – unconvicingly describing Kraft’s opening offer “derisory”. Not long after, and even after a public outcry that a UK business could be attacked and put into play in this way, Carr caved in when the American multi-national improved its bid by more than £1 billion. Carr said it represented “good value for investors”.

Since then Kraft has announced that it is moving the firm’s headquarters to the tax haven of Zug in Switzerland to avoid UK tax – at a probable cost of thousands of UK workers jobs.

He is also chairman of Centrica, the parent company of British Gas, which recently announced a 7% price hike – followed by an announcement, that Centrica raised its full year profit forecast to more than £2.2bn. The regulator, Ofgem, is holding an inquiry into whether major energy companies are “lining their pockets”.

But Sir Dodger – who will become president of the CBI this year – also has previous. As well as his involvement in the £12bn sale of Cadbury, he “played a role in Thames Water’s takeover by RWE of Germany and Chubb Safes by Assa Abloy of Sweden” according to the Guardian.

Unite has responded to the news by saying that Cadbury workers will be “surprised and disappointed” by the knighthood. Unite has said Carr did not deserve an award after allowing the “iconic” confectionery firm to be sold to Kraft with resulting job losses.

Jennie Formby, Unite National Officer, said: “I am sure that the thousands of Unite members working on Cadbury sites throughout the UK and Ireland will be surprised and disappointed to learn that Roger Carr is being honoured in the New Year Honours List.

“Under his leadership he allowed this iconic British company to be taken over by Kraft, a highly leveraged company that has already cut hundreds of jobs since taking over in February and which will undoubtedly be looking for further cuts to help pay down their huge debts.

“But whilst these long-serving men and women were collecting their P45s, Roger Carr was off to pastures new with his golden handshake burning a hole in his pocket, his initial principled opposition to the sale having disappeared as soon as the price was right.

“It is our members, the workers of Cadbury, whose hard work and decades of loyalty should be receiving recognition and honours. Roger Carr certainly does not deserve any awards.”

Another leading figure Martin Broughton, chairman of British Airways, (and Liverpool FC) also got a knighthood. I am saying no more…….

This entry was posted in Media, Politics, Trade Unions, Unite The Union. Bookmark the permalink.