Unite IT workers brave rain to protest at forced redundancies 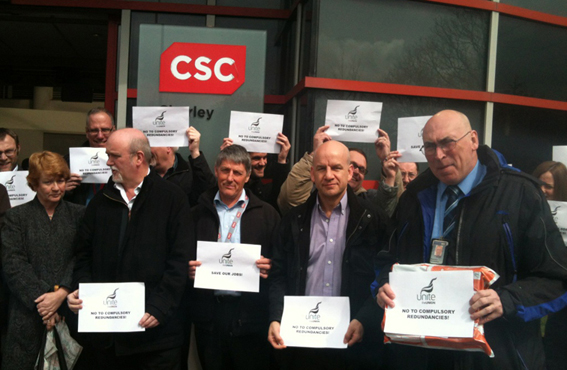 Unite IT workers protest at Chorley

Unite members across the country working for IT services giant Computer Sciences Corporation (CSC) today braved the pouring rain and took to the streets to voice their opposition to the company’s redundancy selection process.

Unite members walked out at lunchtime to blow vuvuzelas and wave banners in defiance of the company’s approach.  Supporters of the fight against redundancies from Unite, the Chesterfield Trades Council, the Labour Group of the Chesterfield Borough Council and the Derbyshire Unemployed Workers Centre turned up at the Chesterfield site to express their support for Unite members.

In Chorley, members gathered at the front of the site holding placards protesting at the redundancies currently taking place throughout the company, with members providing real time updates and images via Twitter and Facebook.

Over at the Leeds site, Unite members staged a protest outside the office, while at Solihull , angry employees were met with honks of support from passing traffic.

Unite national officer, Kevin O’Gallagher, said: “We will now increase pressure on CSC to listen to its staff and to Unite’s proposals. We have put forward a detailed plan which will avoid any compulsory redundancies in the company. However, these plans have fallen on deaf ears. Our members are now taking to the streets to get their voice heard”.

Braving the downpour at Chorley!

Following several weeks of consultation over a reduction of staff working on the NHS account (Lorenzo contract), CSC are insistent on issuing compulsory redundancy notices despite receiving sufficient volunteer requests to leave the company, with a further 640 reductions announced across CSC UK and Irish sites this week.

Messages of support have been received from union members across the IT services industry including from Tony Burke, Unite Assistant General Secretary said pledged “our members can be assured that Unite is fully behind them and we will do all we can to ensure a successful outcome to the dispute we have with CSC.”