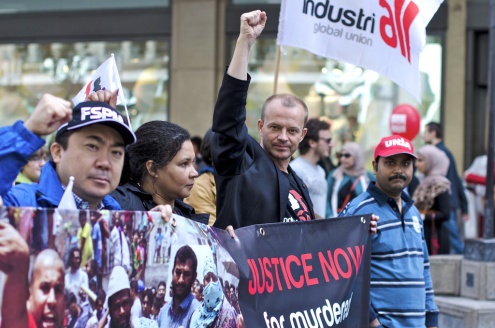 IndustriALL, the global manufacturing union federation and international clothing brands have agreed a deadline of 15th May deadline to finalise an agreement on fire and building safety that will make the garment industry of Bangladesh sustainable.

Funds will be made available for inspections, training and upgrades of dangerous facilities.

IndustriALL and its NGO partners Clean Clothes Campaign and Workers’ Rights Consortium met on 29th April in Eschborn, Germany with a group of international brands and retailers sourcing from Bangladesh and with the ILO to outline an agreement on fire and building safety in Bangladesh.

The parties agreed on a 15th May deadline to finalise the text and commitments.

The meeting was hosted by the German Agency for Development Cooperation, GIZ. The agreement will support the national action plan that was confirmed on 24th March by the Bangladeshi government, employers and unions.

Talks in Eschborn follow the collapse of a building near Dhaka which contained several garment factories. So far more than 400 bodies of workers have been dug out of the rubble, but the final number of casualties is likely to be much higher.

The agreement, building upon an earlier memorandum of understanding, will include principals on governance, inspections, remediation, training, a complaints process, transparency and reporting, supplier incentives, financial support and dispute resolution.

IndustriALL general secretary Jyrki Raina stated in Eschborn that brands and retailers had to develop mechanisms for paying more to their suppliers to guarantee living wages and enable technical upgrades.

He demanded the participants to renegotiate their supplier contracts so that they would include a requirement for raising wages considerably from the 3000 taka (38 USD) minimum wage.

Bangladeshi garment producers’ association BGMEA today agreed to cooperate with IndustriALL on the sustainability issues including safety and living wages.

Raina also demanded that the brands contribute to freedom of association in the garment industry where union presence at the local level is virtually non-existent because of government and employer resistance: Jyrki Raina said: “You cannot create a safety culture and functioning labour-management relations without worker participation and union presence”.

The US$24 billion garment sector accounts for 80 per cent of the country’s exports. Suppliers to international brands and retailers employ four million workers in almost 5,000 factories.