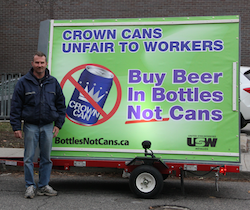 Workers forced on strike in Toronto by giant U.S.-based can-maker Crown Holdings, Inc. (CCK) are warning the company’s shareholders that Crown’s failure to settle the now 15-month labour dispute has resulted in losses equivalent to $0.08/share or $1.34 in lost stock price, based on calculations of the company’s own financial disclosure.

In a letter addressed to over 600 shareholders and analysts, the United Steelworkers (USW) union representing the strikers referred to Crown’s Q3 report: “Crown reported ‘other costs’ of $18 million for the nine months ending September 30, 2014, as “primarily related to incremental costs associated with the temporary relocation of production due to an ongoing labour dispute in the Company’s Americas Beverage segment” (CCK-9.30.2014-Q3) in reference to the strike in Toronto.”

“The Net Income Attributable to Crown Holdings for the same period totalled $374 million.  After assuming a statutory corporate tax rate of 35%, the cost to attempt to break the strike and destroy the union is more than 3% of Crown’s net income for the period. This is equivalent to $0.08/share or $1.34 in lost stock price (using P/E = 15.8).”

“This means that Crown spent the equivalent of $150,000 per worker on this strike in the past nine months when it could have settled the dispute fairly long ago for a fraction of the price,” said Joe Drexler, USW’s Head of Strategic Campaigns in Canada. “Shareholders should be asking serious questions about this, especially since the Toronto facility was such a productive one.”

Crown named the Toronto factory its “Plant of the Year” for its productivity just before provoking a strike there with demands that included permanently gutting the wages of the lowest-paid new hires by 42%. Since September 2013, Crown has attempted to operate the facility with replacement workers. The strikers have always been willing to negotiate a fair deal but the company indicated it wanted to keep the replacement workers (despite apparent production shortfalls) and was only willing to return 26 of the 120 strikers back to their jobs.

The USW has been involved in an ongoing campaign against Crown, including a major consumer component asking beer drinkers in Ontario and throughout Canada to buy beer in bottles instead of cans until a fair deal is reached at Crown.