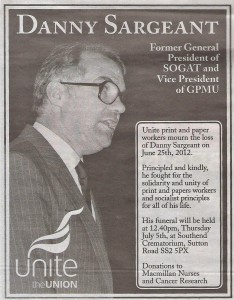 Danny Sergeant, who died on June 25, joined the National Union of Printers, Bookbinders and Paperworkers when he started work aged 14 at the Clyde Paper Mill at Rutherglen near Glasgow in 1945.

His experiences there forged his early interest in trade unionism, and it was there that he first worked with Sam McDougall who later carried out such sterling work with Danny at the Radio Times, East Kilbride print works and in the Glasgow and West of Scotland branch of the Society of Graphical and Allied Trades (Sogat).

After the closure of the Clyde mill, Danny worked at the Radio Times in East Kilbride where he became the father of chapel in the bindery, playing an active role in the G&WS branch where he became involved with Marian Robertson, Bob Gillespie and other Sogat stalwarts.

In the late 1960s Danny moved to East Anglia when he was appointed area organiser, later becoming a divisional officer before rising to the top of Sogat as general president when he succeeded Albert Powell just as the union was entering one of the most traumatic periods in its 200-year history – the fight against Rupert Murdoch at Wapping and Kinning Park in Glasgow, which was a baptism of fire for Danny.

In Danny’s first presidential address at the Scarborough biennial delegate conference in 1986 he showed his internationalism by welcoming Solly Smith from the South African ANC, condemning police brutality, assassinations, job victimisation and jailings by the Botha regime.

He called for unity in the print industry, welcoming representatives of the National Graphical Association and the NUJ and said the aim was one union for the print, paper and media industries and he called for the return of a Labour government, but one with the correct policies.

He helped to guide Sogat through a time of tremendous change and in 1991 he released his dream of one union for print when Sogat merged with the NGA to form the Graphical, Paper And Media Union.

He became the vice-president of the GPMU before his retirement following the merger.

Danny was a thoroughly decent man who epitomised the tolerant and fair values of Sogat.

He spent his life in the service of men and women in print industry and their families.

We in Scotland were particularly proud that “one of our ain folk” had become union president.

I spent the last nine years of my working life at Polestar East Kilbride, formerly the Radio Times printing plant.

In a speech at a social evening to mark the sad demise of that plant, I paid tribute to a number of illustrious trade unionists who had worked there and for their part in obtaining the pay and conditions we enjoyed.

Our heartfelt sympathy goes out to Cathy and her family at this sad time. Danny will be remembered as a trade unionist, a loving partner, father and grandfather.

An epitaph to Joe Corrie, the coalminer poet from Cardenden in Fife, somehow fits Danny – “a man of peace and simple needs bothered by neither ambition nor creeds.”

This obituary appeared in the Morning Star on 3rd July.

This entry was posted in Media, Unite The Union, Workers Uniting. Bookmark the permalink.